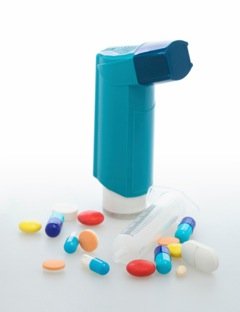 The diagnosis of COPD (chronic obstructive pulmonary disease) requires a simple breathing study to confirm. If you have smoked for at least 10 pack years, i.e. the equivalent of one pack of cigarettes per day for 10 years, you are at risk for developing COPD. Once this disease gets started we cannot stop it. The characteristic pattern is a measurable decline in lung function over a variable period of time.

There are patients who are at high risk but have little in the way of lung function decline when first seen. Many of these patients will go on to develop a period of rapid decline and increased symptoms. It would be great to have a treatment strategy for patients early in the course of their disease to limit or prevent their decline in lung function. The most important part of this strategy is to get the patient to stop smoking since this, along with repeated infections, creates the greatest declines in function.

A recent study has shown that using a medication most often given for blood pressure control may have some benefit in this group of patients at high risk, but without a major decline in lung function. The medication is something called an ACE inhibitor. Of course, this treatment can have some side effects, particularly with lowering blood pressure.

It is too early to tell if this treatment strategy should be applied to all early at-risk patients, but it may offer some hope for the future.