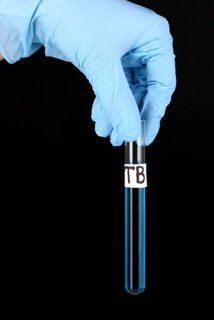 Locally, and in the US in general, TB is not a common disease. There are certain populations which are at risk and they include patients with HIV or some other disorder suppressing their immunity. Today there are drugs given to help treat several conditions that are specifically designed to suppress the immune response that is causing the patient’s symptoms. Drugs such as Humera and Remicade are such treatments.

It is important to know if patients taking these drugs have had contact with TB since these products could cause a recurrence of TB infection. Patients who have had TB exposure in the past are said to have latent TB infection or LTBI. To test for LTBI in the past we have used skin testing. Skin testing requires skill in applying the test and knowledge about how to interpret the results. Recently, a new type of test has evolved using a blood sample from the patient.

The blood test we have been using locally is called QuantiFeron. How this test works and what it tests is very complicated, but the test has a greater than 95% specificity for LTBI. Just as important from my point of view is the fact that the errors in applying and interpreting the skin test are avoided.

If you are planning to take drugs called immunomodulators, such as Humera or Remicade, be sure you are tested for LTBI. There are also several other infectious concerns with these drugs and you need to discuss them with the prescribing physician.